With the explosive adoption of software-as-a-service (SaaS) apps, the average business now has more than 100 SaaS apps to manage, which means data is isolated on countless different systems. This makes the analysis challenging. That is, according to Forrester, between 60% and 73% of all data within a company is not used for analysis.

Ideally, analysts need something that connects disparate business systems, such as business intelligence and analytics tools. But these tools are often complex and non-intuitive, leading employees to spend hours every day researching and gathering information. Seeking an answer, Navneet Loiwal partnered with Tommy Tsai, with whom he had previously founded an e-commerce app, to create Coefficient, an app that brings real-time data into Google Sheets and other sheet platforms. of existing calculation.

“Tsai and I have been working on consumer technologies for many years and have seen a great opportunity to bring consumer-grade experiences to businesses,” Loiwal told TechCrunch in an email interview. Loiwal was previously a software developer at Google working on AdWords, while Tsai was one of the first engineers of the Loopt location sharing smartphone app. “Most data products are designed for the technical user, which results in a poor user experience and low adoption for business users. We wanted to bring the power of technical products to the business user with the simplicity they expect from consumers’ lives. “

To that end, Coefficient, which today closed an $ 18 million Series A funding round, is designed to reduce the number of repetitive, manual tasks that business users must complete on a daily basis to cross data between systems. The platform is built on Google Sheets (with support for Excel coming soon), bringing data from customer relationship management (CRM) systems, SQL databases, and other SaaS tools. 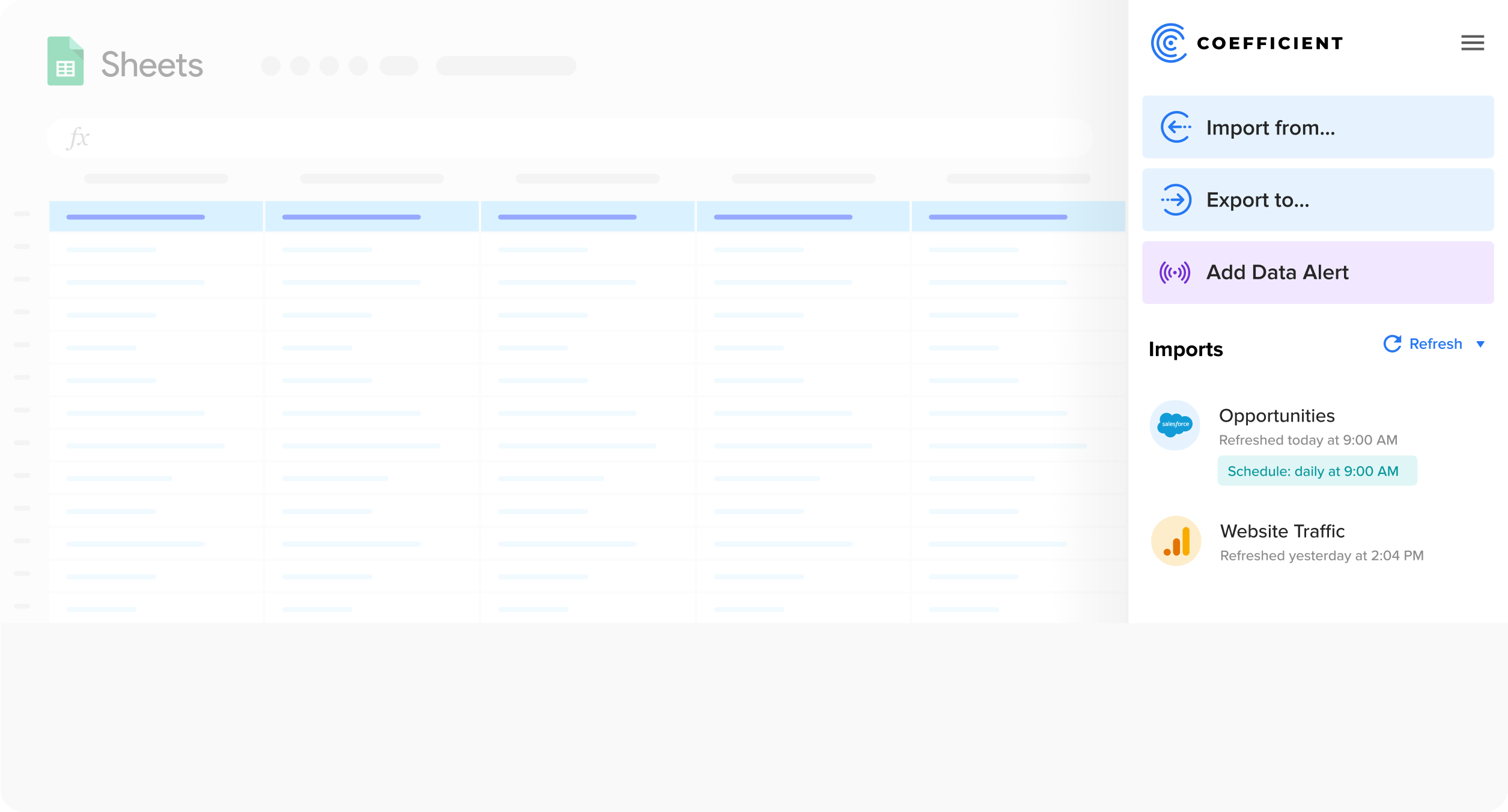 “Business users are more technical in the spreadsheet than elsewhere, yet business teams are often forced to resort to archaic methods of data management, requesting frequent updates from technical teams with data expertise, or exporting raw data from dashboards or CRMs to report repetition, manual analysis, reducing team efficiency and productivity, ”Loiwal said. “Coefficient’s products extend the reach of advanced, connected data and analytics to business users, enabling the company to become more self-reliant through real-time connectivity to the data in their source systems from where they are working – in spreadsheets.” .

That’s a lot to promise. And to be honest, Coefficient isn’t the first to attempt this sort of thing. Startups like Airtable and Smartsheet already offer spreadsheet-like user interfaces to organize business data. Others have tried to give the formula a twist, like spreadsheets with apps and spreadsheets with granular access controls.

In fact, at first glance, Coefficient sounds a lot like Actiondesk, which similarly connects to databases, CRMs, and SaaS tools to insert real-time data into Excel spreadsheets and Google Sheets. As a Coefficient, Actiondesk supports common formulas and offers templates to get you started.

But to its credit, Coefficient got off to an auspicious start: Loiwal says Zendesk, Spotify, Foursquare, Contentful, and Miro are among its customers. Together, tens of thousands of people are currently using the platform.

“We are seeing our clients increase their contracts with us despite being fired, a testament to the value proposition of making business teams more efficient,” said Loiwal. “Furthermore, with the increase in remote work and complex economic headwinds, companies need their employees to become more self-sufficient.”

Loiwal says the Series A proceeds will go towards expanding Coefficient’s product offering and “scaling down global operations.” In the coming months, the startup plans to add new SaaS system integrations and expand the scope of its report automation tools.

Battery Ventures led Coefficient A series with the participation of Foundation Capital and S28 Capital. To date, the company has raised $ 24.7 million in capital.

Neeraj Agrawal, a general partner of Battery Ventures, added: “It is a testament to the craftsmanship of the Coefficient team’s product that users become evangelists, promoting the use of the product throughout the organization … Coefficient products provide business users the tools and automation needed to achieve peak performance, a key benefit in an unpredictable macroeconomic environment. “