The term ‘pro forma’…. is most often used to describe a practice or document that is provided as a courtesy or meets minimum requirements, conforms to a standard or doctrine, tends to be performed in a perfunctory manner, or is considered a formality…

As mentioned in part one of this editorial series, Pagosa Springs Mayor Shari Pierce asked four city staffers during the Nov. 1 city council meeting, asking if they had any questions about the “pro forma” presentation held by Garrett Scharton, a vice president with Dallas-based student housing developer Servitas.

“I want to ask the Council staff – April, James, Andrea, Clay – do you all have questions?”

City Manager Andrea Phillips responded. “I have no questions. I have some concerns. She laughed. “Not really questions, right now…”

We didn’t get a chance to hear Ms. Phillips’ concerns during the meeting. So I reached out to you earlier this week, asking if you could provide a copy of the pro forma spreadsheet…and perhaps, tell us what your concerns are at this point.

He responded by sending the spreadsheet that Mr. Scharton had shared with the city council on Nov. 1. He has written:

here is the [spreadsheet] they showed in the meeting. Note that it will change quite a bit in the coming months as we change various assumptions. This is a moving target and none of this is set in stone.

My concerns are related to realizing a project of this size in the current market (historically high interest rates, dramatically increased construction costs, etc.). Council is seeking significant grants to help with the cost of the project. The municipality will have to make a decision in the coming months as to what rent rates it wants to achieve and therefore, what additional subsidies, if any, are to be provided. They asked Servitas to come back with new proforma scenarios at a future board meeting showing different vacancy rate assumptions, revenue assumptions that include and don’t include different grants, and updated interest rate scenarios. We may also need to reduce project costs through some value engineering, cutting some units, etc. As well as looking for additional income.

The project has grown by 34 units from the original 64 and we are now in a very different market environment.

Our financial advisor, SB Clark, who we hired independently from the Servitas team, was also at the meeting and has the same concerns about the project in this current market.

Consider, in detail, Ms. Phillips’ comment about “what rental rates [the Council members] do you want to hit…”

During Mr. Scharton’s pro forma presentation, we saw the following estimated rental rates for some of the proposed units. Servitas offers four “programs” to reach four different income levels: 60%-80% AMI (Area Median Income); LOVE 80%-100%; LOVE 100%-120%; and 120%-150% of AMI. The current proposal suggests roughly the same number of units and the same variety of units for each income level. 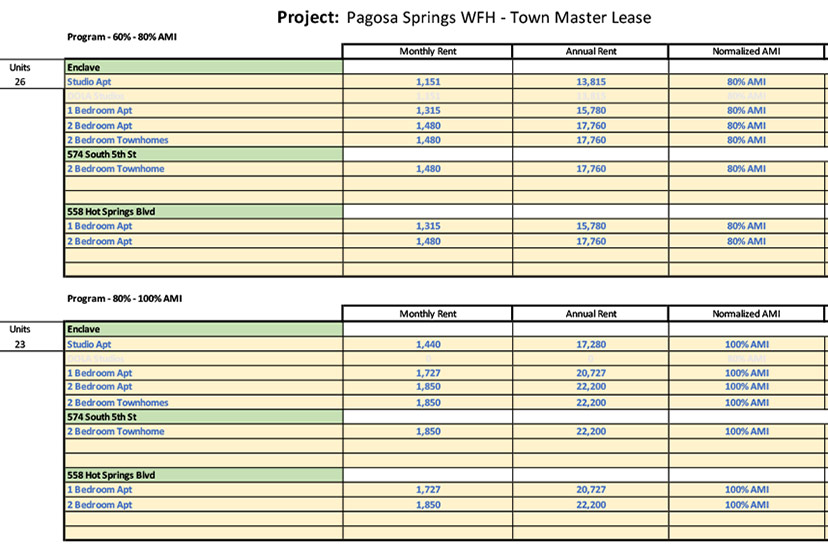 As mentioned, these are the “cheapest” programs. The other two Servitas programs show much higher rents, even for 400-square-foot studios: up to $2,160 for a studio and up to $2,775 for a two-bedroom apartment.

Presumably, these taxpayer-subsidized prices are meant to accommodate “workers.”

But consider the cheapest apartment: a studio apartment (zero bedrooms) targeted at an income level of 60%-80% AMI…and priced at $1,151 a month, which VP Scharton described as “a killer deal in Pagosa Springs.”

According to the Colorado Housing and Finance Administration (CHFA), a person paying $1,151 a month for housing should be making $23 an hour, or about $920 a week.

Further indicating that, according to the CHFA and the BLS, more than half of our workers do not earn enough to rent the cheapest zero-bedroom apartment offered by Servitas. 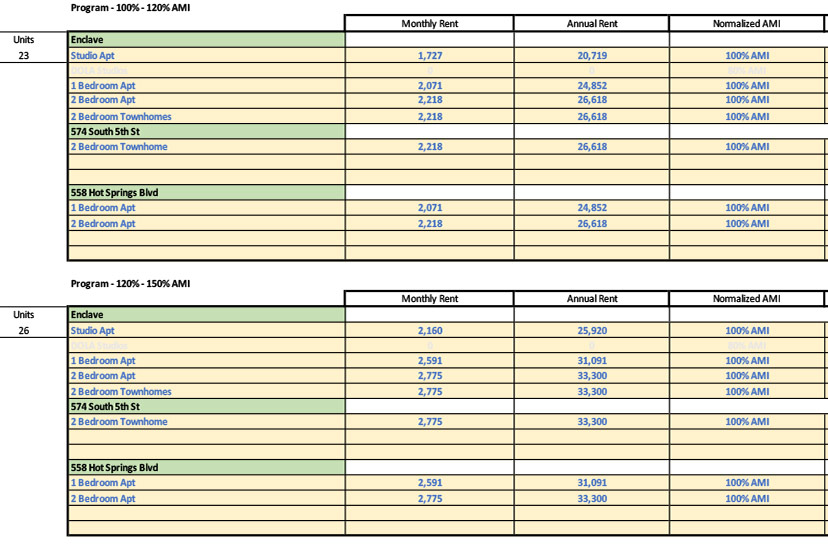 As seen above, even a married couple — each earning the average Archuleta County salary — would not qualify, under CHFA guidelines, for a one-bedroom Servitas apartment priced at 100%-120% AMI. .

We may be concerned about this proposed taxpayer-subsidized housing.

“So, you said these are a terrific deal for Pagosa Springs, but living here and knowing our families here, I think there are still going to be people who can’t afford these rentals. And I think this is where the Council falls, to further subsidize the project.

I currently serve on the board of directors of the nonprofit Pagosa Housing Partners, the organization that wrote the city’s official housing plan in 2019. Our organization also submitted a response to the City’s “Request for Proposals” (RFP). October 2021 of the city seeking willing developers to build workforce housing on vacant city-owned lots.

Our plan was very different from the one proposed by Servitas. We wanted to “start small”, with an 8 unit development, fully funded by PHP, with no risk to the city or taxpayers and no need for additional grants. We estimated the rent for a one bedroom apartment at around $820 a month, including utilities. This would make a bedroom affordable (under CHFA guidelines) for a single person making about $33,000 a year, or about $16 an hour.

The rent for our two bedroom apartment was estimated at $1,200 a month. Here’s what each of the two four proposed complexes would look like, based on a similar design built in Salida, Colorado: 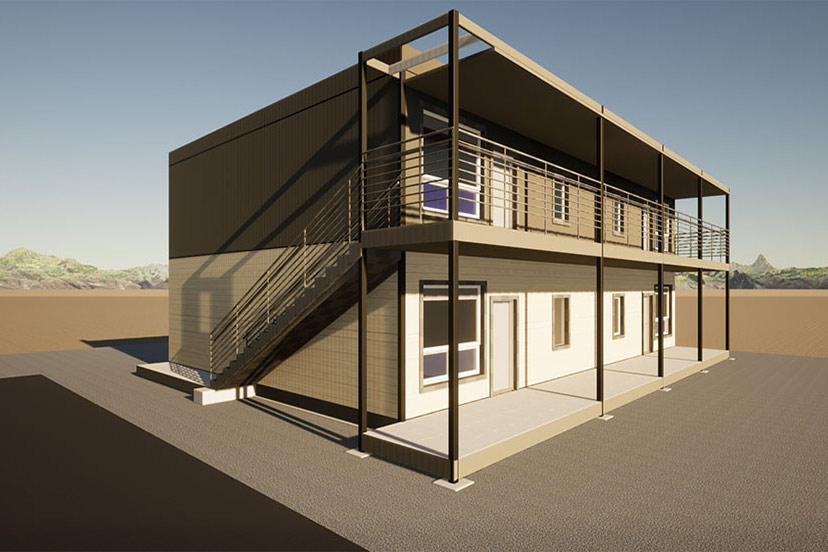 The modular units were allegedly purchased by the same Pueblo, Colorado-based company that Habitat Archuleta is now using for its housing projects.

64 units! Or maybe even 98 units! From an experienced company.

However, this choice will not be without risks. And it will apparently cost taxpayers a great deal of money.

Which reminds me of a moment from the Disney movie Pinocchio, when Jiminy Cricket – believing himself to be Pinocchio’s “conscience” – lost his temper at the puppet’s refusal to listen to reason. 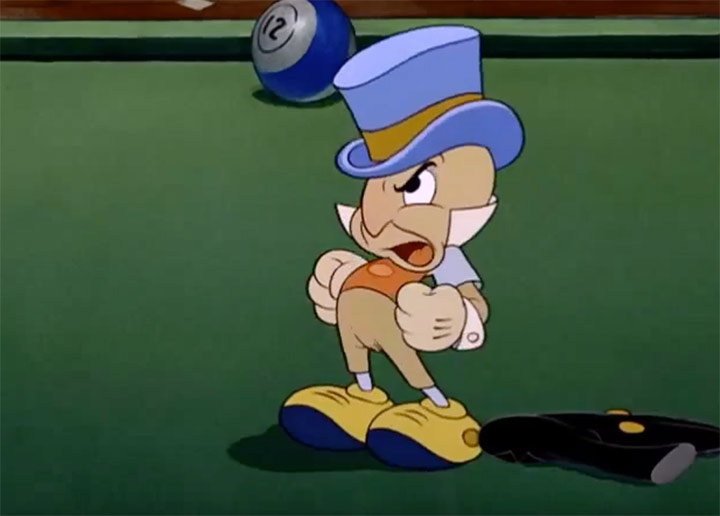 “Look at you! Smoking! Playing pool! Okay, that solves everything… you’ve buttered your bread! Now sleep in it!

Bill Hudson started sharing his views in Pagosa Daily Mail in 2004 and can’t seem to break the habit. He argues that, in Pagosa Springs, opinions are like pickup trucks: everyone has one.