The performance of the British pound this week will try to maintain the previous week’s 4.0% gain against the US dollar, its biggest gain since March 2020. This is the period when the markets were recovering from the initial panic of the spread of the Corona virus. The recent rebound gains for the GBP/USD currency pair reached the 1.1854 resistance level, the highest for the currency pair in two and a half months and has stabilized around the 1.1770 level at the moment of writing the analysis. The pound awaits a package of important and influential economic data and measures.

Conversely, the British pound is considered to be a “high beta” currency, meaning that it tends to rise when global markets are bullish, which they certainly have after an inflation reading. On the dollar, “further short-term downside cannot be ruled out as markets get rid of long dollar positions,” said Thanem Islam, market analyst at Equals Money. Additionally, a daily research note from TD Securities said: “While we believe this pressure is strong and a near-term pullback is expected, it is clear that the market is at a crossroads. We see some tendency to move forward with that.” This could extend into the next few weeks until the next CPI report.

This week may be driven by events in the UK as the heavy spreadsheet meets a major tax policy update from the new UK government. Wages and employment data are released on Tuesday, with market consensus expecting the average income index, including bonuses, to rise 6.0% in September. The country’s unemployment rate is expected to remain unchanged at 3.5%, but job losses are expected to be reported at 155,000 in the three months to September.

If UK data disappoints, the British pound should fall. However, Wednesday’s UK CPI inflation should be of greater significance for the pound, as it has a direct impact on the future of the Bank of England’s interest rate decision-making process. Headline CPI inflation is expected to come in at 10.6% year-on-year in October, up from 10.1% in September.

The core CPI reading is expected at 6.4%, well above the Bank of England’s 2.0% target and in line with further rate hikes. It is difficult to predict how the pound will react to this data: will it rise on weak inflation, as this suggests that the economic pain from inflation will be less severe? Or is it declining because the footprint of weaker inflation suggests the BoE may soon end its rate-hiking cycle?

The uncertainty comes as the pound’s relationship to interest rate expectations shifts into 2022, thanks to the turmoil that followed the ill-fated balance sheet of Liz Truss and Kwasi Karting. At the time, the Bank of England’s rate hike expectations were consistent with sterling weakness, while the long-term rule is that higher interest rate expectations support the currency. This breakdown of the pound-to-rate ratio reflects the risk investors saw in the UK’s outlook due to Truss’s unfunded tax cuts. Therefore, this week’s reaction will be important as it should indicate what matters again for the pound and whether or not the risk premium for karting is gone.

Technical analysis of the pound against the dollar today:

GBP/USD is trending up within a visible uptrend channel in its short-term time frames. The price is currently testing resistance and it could be due to falling support levels marked by the Fibonacci retracement tool. The 38.2% level is close to the interesting central area of ​​the channel around the key psychological mark of 1.1600. The major pullback could reach the 50% at 1.1500 or the 61.8% Fibonacci level at 1.1412, near the dynamic support 100 SMA.

The dynamic inflection point at the 200 SMA lines up with the channel bottom near 1.1300 and the line may be in the sand for a pullback. A break below this could result in an uptrend reversal. So far the 100 SMA is above the 200 SMA indicating that the overall trend is up and support levels are more likely to hold than break. If so, the GBP/USD pair could soon reach a swing high of 1.1856 or higher. The stochastic is currently signaling overbought or exhaustion levels among the buyers, so a move down means the sellers are in control. The oscillator has plenty of room to fall before reaching the oversold area. Similarly, the RSI is just starting to decline, reflecting a resurgence in selling pressure.

Ready to trade with our daily Forex analysis? We have created a list of the best brokers to trade Forex that are worth using. 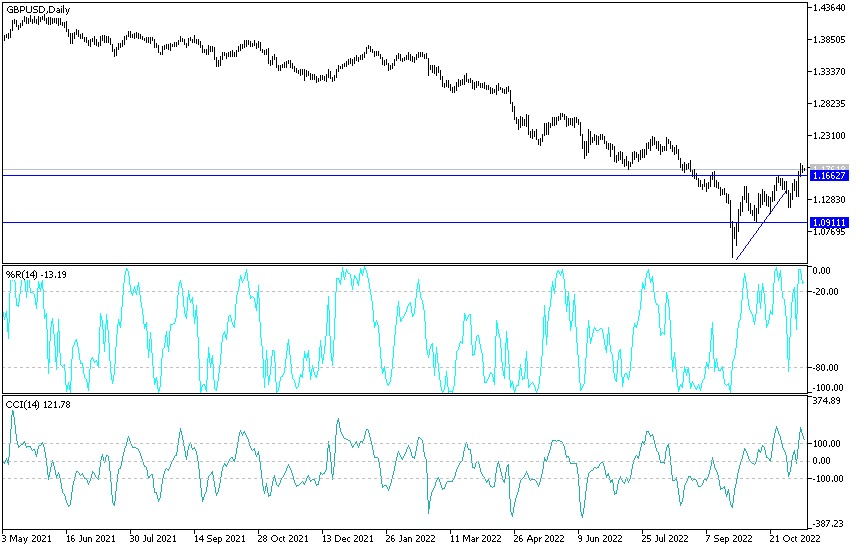